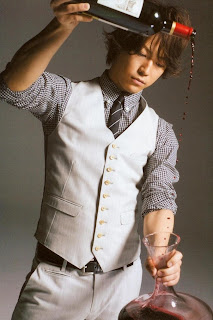 If you don't drink wine or alcohol, I don't recommend watching this drama. This is the kind of story where you learn a lot on a subject, in this case wine, mostly French wines. It does drive you to drink, though do be careful, it's easy to overindulge in wine while watching it.

The story itself is interesting as well. Kanzaki Shizuku is the son of a famous wine critique, but he doesn't drink wine for an emotional reason. When his father dies, he has compete with Tomine Issei, who is also a wine critique adopted by his father shortly before he passed away. The competition is made up of seven riddles written by the father that all lead to a wine. The one who gets the most right gains the wine collection worth 2 billion yen. Though Shizuku doesn't want the money, he ends up competing anyway in order to learn more about the father he never understood while alive. Issei is not really interested in the money either, he wants to surpass the old man.

Kanzaki Shizuku is played by KAT-TUN's Kamenashi Kazuya. Frankly, I'm not very impressed by his acting skills. I wasn't in previous dramas I've seen of him and not in this one either. Often his characters seem to be in kind of a daze, not being very passionate about anything. The character is a rather brooding one in this drama, but I just don't find myself liking him or rooting for him.
Who does make you want to root for his side is Shinohara Miyabi played by Naka Riisa. She has all the passion that Shizuku lacks and she is the one who gets him to drink in the first place. She is a sommelier-in-training who first tags along with Shizuku in an effort to learn those things from him about wine that he himself learned from his father, though mostly unknowingly. She then becomes a vital person in his life and his female helper. She offers her own knowledge on wine and draws in more people to help Shizuku.
Tomine Issei is the opposition. He is played by Tanabe Seiichi who portrays a calm passion towards wine. He is much older than Shizuku and is a renowned wine critique in his own right. He obviously has more of a chance of winning and he does manage to make the identifications on his own. However, it is sometimes exactly his vast knowledge than hinders him in the game.
Issei has his own female helper, Saionji Maki played by Uchida Yuki. Though her role is more of an emotional helper than Miyabi's. She helps Issei by keeping him focused and cheering him on. Though their relationship is based on her being his girlfriend, the two still feel distant at the start of the drama. They are both adults and have their own baggage.

This drama is worth watching for the knowledge that you can gain from it. The story does have interesting twists, but doesn't draw you in completely. You may find yourself getting bored without having an interest in wine.
Posted by Isabelle at 7:55 AM No comments: 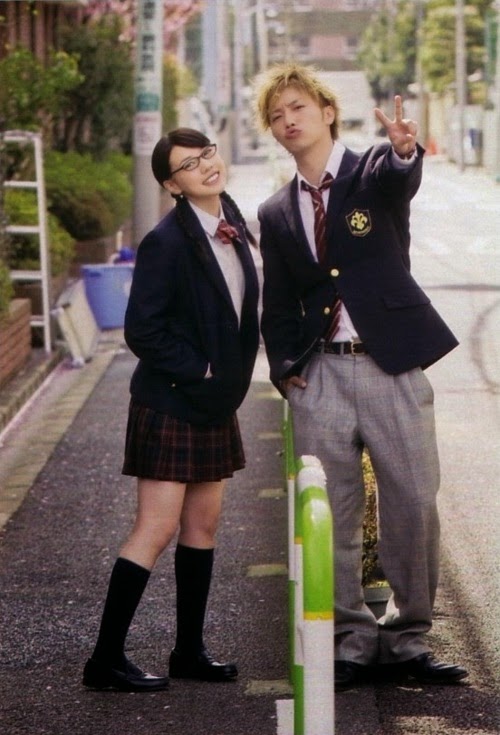 This drama is a high-school drama. It has all the usual characteristics of dramas that are about teenagers. You have some fighting, studying and the troubles of growing up and figuring out your own path in life. Watching this drama you will probably not come across anything that is new on this subject, since it has been done many times before. However, this story is still worth watching just for the fun of it. It doesn't want to take itself seriously. The way the story is told makes you seriously consider that it's more like a parody of the genre, rather than an actual take on it.

It doesn't lack a story and likable characters. The main protagonist is a boy names Daichi, who is the son of a doctor who has a small general clinic. He is played by the very cute Narimiya Hiroki, who has a memorable smile. He is the "Yankee". In Japan a "Yankee" is a sort of a juvenile delinquent. He skips school a lot, gets into fights and is generally bad news. As can be predicted, he will not stay the same till the end of the drama, though he will not completely change either.
The main female character is Adachi Hana, who is the "good girl" in the school. We can see Naka Riisa in this role who pulls it off very well. Striving to be the perfect normal high school student, it becomes obvious she is trying a bit too hard. It's not an easy role for Naka Riisa as such a character can easily become too much for the audience, but she remains lovable through the whole story. I also have to note that as I've seen her in several dramas, she is an excellent actress, and always plays her characters in a believable fashion.

The story is the usual "good girl reforms bad boy", but with a twist. Both of them are changed by the experiences they have, and grow up a lot, not just the bad boy. They are two extremes that try to define themselves based on the labels they adapted, but humans can't be defined by labels. As they get to know each other better, they both have to come to realise that they are both just humans.

I do recommend watching the drama, but it may not be suitable for people who are well beyond their own high-school drama.
Posted by Isabelle at 7:14 AM No comments: