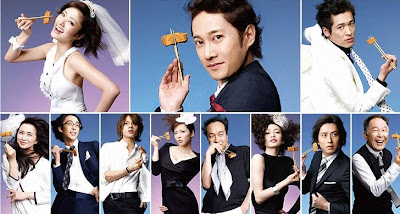 Konkatsu! (Marriage Hunt!) is a romantic drama with some comedy. It's about a Amamiya Kuniyuki finding a government job after many years of being unemployed, but lying about wanting to get married to his long-time girlfriend, since he doesn't even have a girlfriend. He gets hired specifically because the district president wants to promote marriage, and help the declining birthrates in her district. Therefore, Kuni goes on a marriage hunt along with some friends and co-workers to keep his job.
The drama isn't just about a marriage hunt, but also Kuni's district, which is becoming abandoned. He doesn't want to leave, so he has to find ways to save it.

The characters were generally likeable, and well acted, believable. I especially liked Ueto Aya's performance. I have seen her in some other dramas and she always feels fresh, and sweet. Her character, Tobita Haruno, is a shining sun in the otherwise dreary sets of the declining district. She plays one of Kuni's childhood friends, and has a crush on him that she's been harbouring for years.
Kuni is of course the lead character, and the driving force of the drama. It's through his trials and tribulations that we travel on this journey, and he introduces us to the other characters. He is somewhat reserved, but that's a rather typical trait of many of the male characters in dramas. He is a good and faithful friend, and you do cheer for him. Nakai Masahiro, who plays Kuni, is not an especially attractive man to me, but the nature he portrays makes him likeable, and I'd marry him.
There are many more people hunting for marriage in this drama, and I don't want to spoil all the surprises that has in store. I do want to talk about the district president, Mizoguchi Shizuko, who is a mostly fun element in the drama. She seems to have a need to be the centre of attention, and to be famous among the district residents, and how she tries to achieve that is always fun to watch. She does, however, have a genuine want to make things better, even though that may not always be apparent. Some say comedy is hard, but Fubuki Jun pulls it off really well.
Another interesting character is Masaru Ito, who seems to be the villain of the drama. I don't want to spoil things, but if I interpreted his looks and gestures at the end, then it's certainly new for me in Japanese Dramas.

Some interesting things in the drama are the different types of date parties that Kuni goes on. They are all organised by the professional matchmaker and old friend of his, Takakura Makoto, and aimed at providing an environment for marriage hunters where they can relax and get to know each other. As someone who has been looking for love for over a decade, it made me wish we had such organised group dates as well. They looked like a lot of fun. There was the old rapid date, cooking party, golf party, yoga party, chocolate fountain party - my favourite, and I may have left some out. Any matchmaker could learn from the drama.
Another theme of the drama was Kuni's father's tonkatsu shop that he runs alone. At first I wasn't really sure what it was, it just looked like breaded meat to me. It's pork and breaded in panko (sort of bread crumbs). Looked really good and always made me want to eat something like that. It's traditionally served with shredded cabbage, and of course rice is matter of fact. One sign that Kuni isn't always completely dedicated to his father and the district is that he doesn't like the dish, and can't even make it, so he never helped his father, even when he was unemployed. Though we have to admit that people are not exactly lining up at the door.

Overall, the drama is fun and light. Not action packed or anything, but if you want to just curl up in front of something on a rainy afternoon, this is for you. Probably not for guys though.
Posted by Isabelle at 11:31 AM No comments: 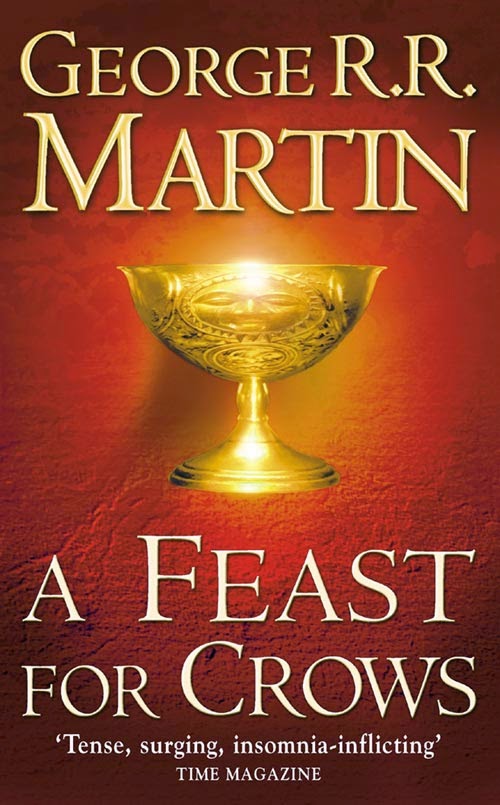 This book is the natural progression from the previous ones. It's a bit different in that we don't get to read about all the characters, just a few that are connected to each other. We also get to briefly see Dorne, which I found interesting.

It dragged for me a bit, but that could be because my two favourite characters Tyrion and Dani aren't in it. I missed them.
Some of the characters that I was sort of on the fence about, like Jamie and Sansa I grew to like by the end.
Brienne I just can't care about. I almost wanted to skip over her parts, and frankly, she didn't add much to the story in this book. Maybe in the grand scheme of things she'll be important, but if she gets killed off, I'm not going to be sad. We also get to get to know the people on the Iron Islands more, but frankly, I don't like anyone there and if one of Dani's dragons torched them all, more power to them. Roasted ironmen!
Cercei is pretty much THE villain at this point, so reading about her is fun. She's also one of the more important people that you actually know are important, so reading about her is like watching the news on a crisis. Feels like something that matters.
Arya I'm on the fence about, because sometimes she's just weird. You don't really know if she's nice or not or stupid or clever. Maybe she's in flux and could go either way. Same goes for Sam Tarly. Though maybe the problem with them in this book is that while a lot happens with them, it feels like filler mostly. There are some important things, but the detail with which they are treated feels forced and unimportant.

The story and the characters are still consistent and generally interesting. They also feel real, which is one of my favourite things about the series.

Overall, the book has highs and lows to me. If your favourite character is in it, it probably helps. I'm looking forward to the next one a lot more.
Posted by Isabelle at 6:13 PM No comments: 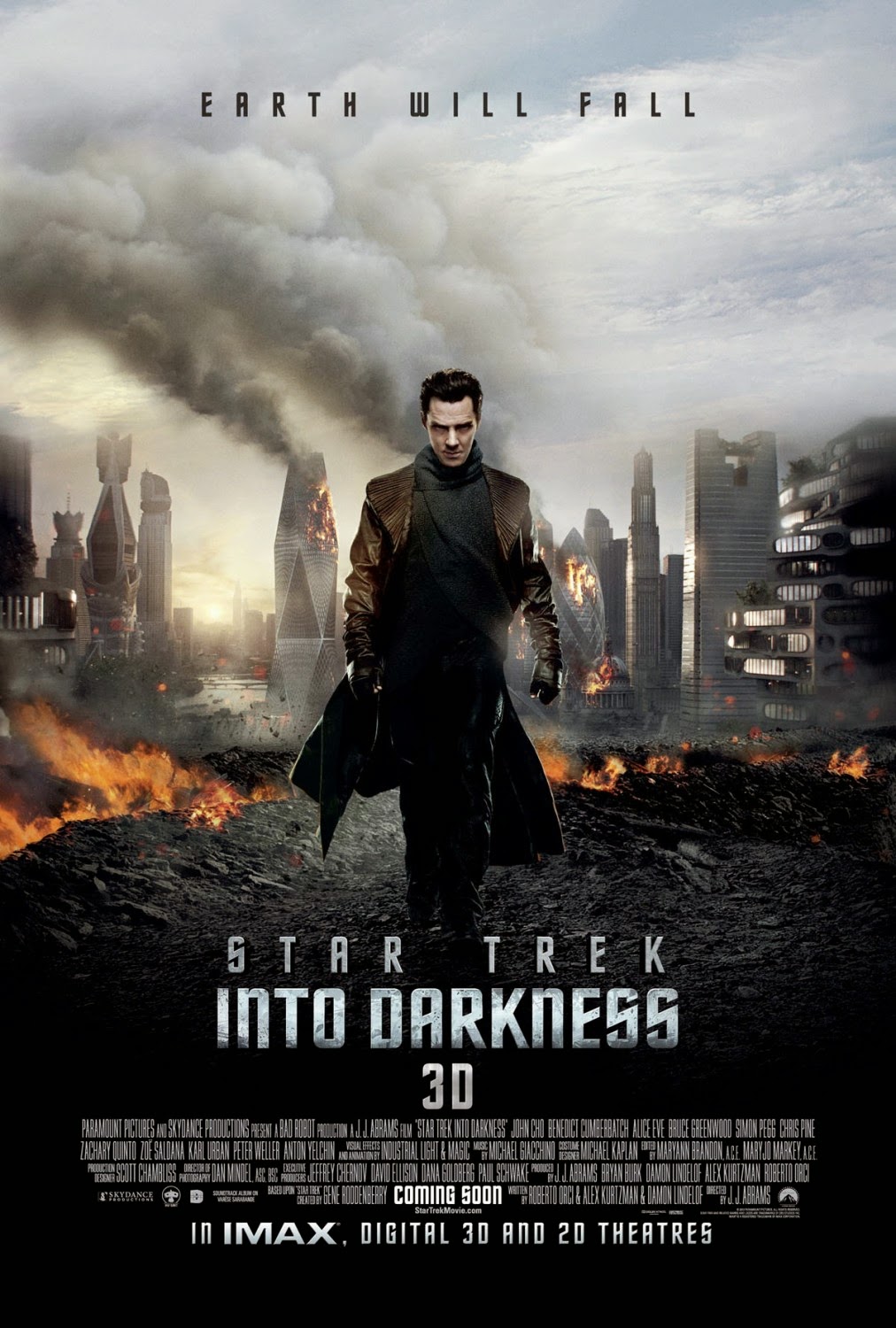 I do have to say, I'm a huge fan of Star Trek. It was one of the first the first sci-fi-s I've ever seen, back in the day on Sky One. It was the original series, and then I went on with the new series. Therefore, at first my mind was occupied by "OMG, Enterprise in 3D!!!!" The scenes were gorgeous. The future London and San Francisco, the starships, a real treat for the sci-fi fan. I like how they kept the style of the original movie and series. You did see a lot of 60s influence with short skirts and that weird hair that goes up. Visually, it didn't disappoint.

Frankly, I don't remember much of the original second movie. I have watched it several times, but not in recent years. The twist towards the end was nice, I did remember the original of that. Of course in such a movie you can't really expect a very complex plot, but the story was fun too. The action didn't seem forced. Sometimes in action movies you just don't know why they jump through all these hoops when they could solve things more easily. The sequel was definitely as good as the original. Even the remake was as good as the original.

The acting was of course superb. All the actors are well established and most have played their roles already in the first film. Benedict Cumberbatch is a newcomer, but if anyone has seen him in Sherlock, there can be no doubt of his talent. I'm only sorry I couldn't hear the whole thing in English, but the local theatre only had the movie with the Hungarian dubbing.

Overall, the movie was as spectacular as expected. A must-watch for fans of Star Trek, sci-fi and even for those who like action. I can't say a bad thing about it.
Posted by Isabelle at 10:59 PM No comments: