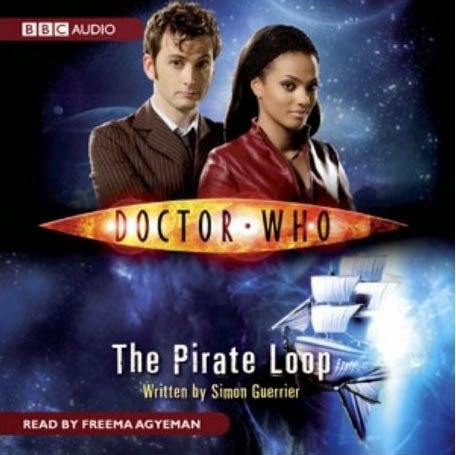 I listened to the abridged audiobook version of the story.

Martha, that is, Freema Agyeman read it. Like I said before, she does a very good job of reading these audiobooks.

The story is among the most original book stories I've read for Doctor Who. It takes place on a starship called the "Brilliant". It has space pirates, time loops, the good old wibbly-wobbly, so it uses the potential of a Doctor Who story very well. I kept listening to it through the day, as it's full of twists and turns that will keep you wanting to go on with the story.
The story didn't feel incomplete, as with some of the audiobooks. It has a good pace and flow.

There are several characters that I liked in the story. Mrs Wingsworth was a bit annoying at first, but she turned out all right. The space pirates were a bit of a surprise, but I could see the point of their characters.

Overall, I recommend this story for everyone. Maybe even people who just like a good sci-fi story, as it has plenty of that.
Posted by Isabelle at 5:20 PM No comments: 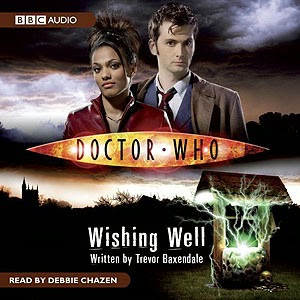 I listened to the abridged audiobook version of the story.

It was read by Debbie Chazen, who plays Foon Van Hoff in the Christmas special "Voyage of the Damned". It was a nice job, nothing disturbing.

The story takes place in a small English village, and centres around the wishing well in the middle. Strange stories and events surround the old well, and the Doctor decides to investigate with Martha. My problem with the story was that it reminded me too much of several other stories, most noticeably The Art of Destruction and Forever Autumn. They all take place in or near a small village, with something lurking under the ground. There is the old mind control involved, which is such a reoccurring theme, it's getting boring. Seriously, authors, think of something new. So this story gets points deducted for being unoriginal. There are some nice action scenes, but the ending feels abrupt. It may be because of the abridged version, but if it is, then they should have paid attention to that.

The supporting cast are very minor. I didn't care for them. A couple died rather abruptly, and what disturbed me was that the Doctor didn't show his usual concern about it. That could also be just the audiobook.

Overall, it was an okay story. Nothing really special though. I recommend it just for the die-hard fans, and out of the library, or borrowing from a friend.
Posted by Isabelle at 5:18 PM No comments: 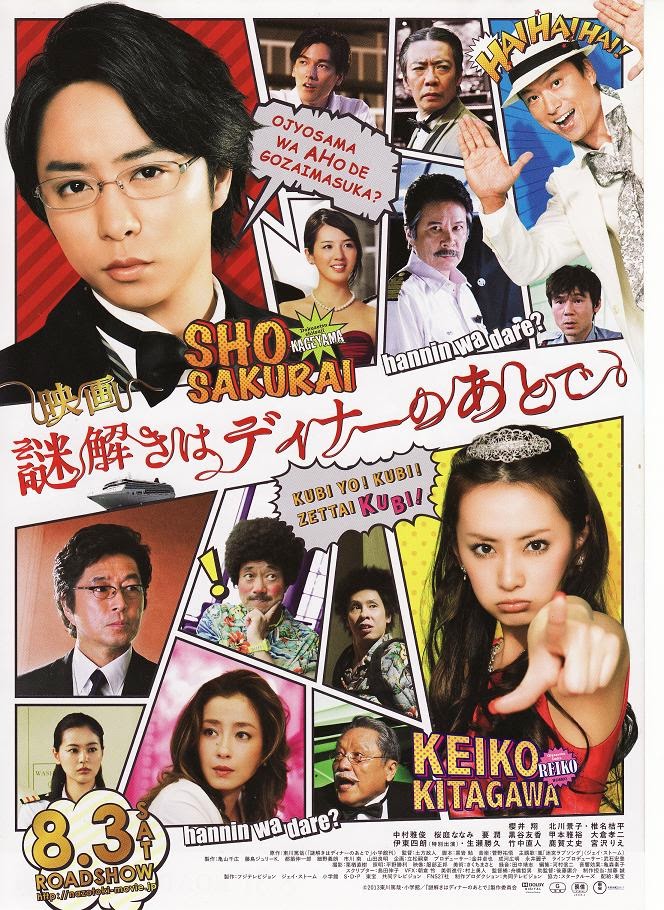 Nazotoki wa Dinner no Ato de (Solve the Mystery after Dinner) is a detective drama. I found it similar to Meitante no Okite in that the endings of the episodes are not very satisfying. If you compare them to Western detective stories, then there the perp is always evil, with evil intentions. Here that's not always the case. Actually, I often found myself sad for the killer, wishing they wouldn't have done it, that they found another way. I even cried at the end a few times.

Another reason why it reminded me of Meitante no Okite was that it's also not a completely serious drama. While at times it's moving, you also get moments of hilarity and utter ridiculousness. In a way those things keep it from becoming too serious.

The episodes all follow a pattern, which does characterise detective dramas as a whole in the world. If you just think about Poirot and his customary reveal, then you realise that having a pattern is not that strange after all.

The drama stars Keiko Kitagawa as Reiko Hosho, a rich heiress that decides to become a detective at her local police. She doesn't tell anyone at work that she's actually very rich. She is quite young, a bit stuck up, and a bit petulant, but still a lovable character. Keiko did a great job of portraying a person who is very serious at her job, but still childish at home. While she likes to think of herself as a good detective, she's not very observant in reality. However, at the end of the episode she always seems to understand the world a bit more than she did before.

Sho Sakurai plays Kageyama, Reiko's new butler. So far I've only seen him act in Yamada Tarou Monogatari. His character speciality seems to be the stoic type. Kageyama is the actual detective in the story. As part of his job he follows Reiko everywhere. In some cases this proves to be important, in other cases his hiding methods are only there for the fun of it. His logic and knowledge of the world is what actually closes the cases. He also has a love of mystery novels, that can account for why he's so good at solving crimes. He is blunt, but also sweet, with a sense of pride. His character doesn't seem to change a lot, even though at the end they sort of claim that it did.

Kippei Shiina as Kyoichiro Kazamatsuri is Reiko's boss at the police force. He's the senior detective, and also an heir, but he lets everyone know that. He is the source of most of the comedy in the story, as his detection skills are actually non-existent. He is important, but still a side character.

Overall, the drama was an enjoyable one. During the episodes I again learned some things about Japanese culture, and even some details about the language. I also had fun, but found myself lamenting the endings. I recommend this drama to anyone that doesn't mind characters behaving a bit strangely and over the top sometimes.
Posted by Isabelle at 5:02 PM No comments: 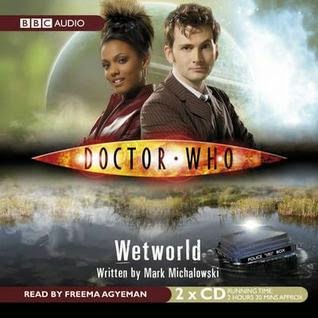 I listened to the audiobook version of this story.

This is the first one that I listened to, and was ready by Martha, that is, Freema Agyeman. I thought her reading style and her voice were very good. She did the parts of the Doctor well, and in character.

The story takes place on an alien planet. It's ironically called "Sunday". The Doctor once said that on Sunday nothing happens, but here many things did. The story wasn't all that fabulous to me. While it was interesting, and not boring at all, it was slightly predictable. Though towards the end I did have a moment of classic; "Now how will they survive this?" It just made me wish that it wouldn't obviously be mind control again. I don't think I gave away anything with that.

The supporting cast are nice. I especially liked Candice, who was one of those people who actively help the Doctor, and are even effective. Kind of made me wish they took her along for the ride.

Overall, it's a fun adventure. While the audiobook is abridged, it doesn't feel to lack anything. Though it is rather short. However, the flow and the pacing are excellent.
Posted by Isabelle at 10:17 PM No comments: The second establishment of the series didn't disappoint. It was exciting and full of twists and turns.

In the previous book there weren't that many supernatural elements, that are usually part of a fantasy. Towards the end there were more, but most of the characters didn't come across anything especially strange. In this book, those elements become more and more.

What I loved about the book was partly that. The supernatural just popped up, and came about unexpectedly most of the time. There were several mysteries, and story lines that kept me turning the page.

What I didn't like was that sometimes the action started to lag. There are people who like all those little details that some writers, especially those who can't write a book under 600 pages, put into their narratives. However, to me, these were sometimes too many. I remember two instances, where I just couldn't take it anymore, and started to skip a few pages. Probably the most unnecessary part was when Jon Snow was going up the side of a hill in the middle of the night. Every rock he encountered was described in detail. I ended up shouting: "I get it, it's hard, now arrive on the top already!" Really, sometimes you just need to edit.

Overall, we get a good character growth from all the major players. We also meet a few new ones, and that keeps things even more interesting. The action is good, and even though there is a war on, we don't get an overwhelming amount of battle scenes in the book. Those can get a bit boring after a while. The story is still interesting and entertaining. I reached for the third book immediately.
Posted by Isabelle at 7:51 PM No comments: