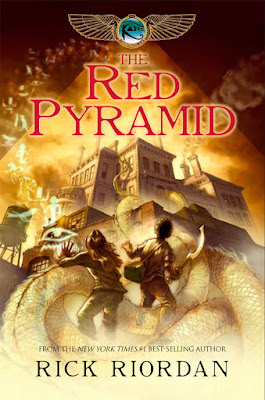 I listened to this story as an audiobook. The funny thing about that is that it's actually the best format for it. The story is actually set as a transcript of tapes that were dropped off for the writer. On the tape, two kids talk about their crazy-sounding adventures with Egyptian gods. So when you are actually listening to two kids talking about what happened, it comes across just the way it should.

The story itself is similar to other books by Riordan. Kids get into an adventure that involves stopping a god, and also travelling through the US. The difference is that on the one hand they are not demigods, and the mythology is Egyptian. Now I'm a great lower of Ancient Egypt, so this was a plus for me.

Overall, this is a great adventure, but I find that I wasn't taken by it as I was with the other books. The characters aren't that complex, and the focus seems to be more on the story and the mythology, than them. That is also why I didn't write about the kids in detail.
Posted by Isabelle at 4:26 PM No comments: 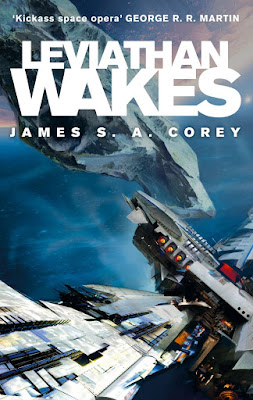 Any book about the future is always also about the present. This book isn't Star Trek. Humans are still petty, after their own interest. So while the setting is space, people act the same way they would on Earth. I guess the old saying of the more things change ... works. I had this thought, but so did the author, that no matter what, we are just primates swinging poo at each other, or poking things with sticks.

The story is about a period of humanity when we have left Earth, but took the problems with us, while staying in the Solar system. We have colonised Mars, some moons, even rocks in the asteroid belt. I loved how living, growing up in space had physically changed people. I also found the way they spoke interesting. A mixture of the different languages of the people who went there. However, the same way as when Europeans colonised the rest of the world, the colonies are treated just as badly. And they want to break away just as badly. Thrown into this tense environment is something unexpected. Without spoiling things for those who are not watching the show, it's big.

The story itself is told from the point of view of two men. One is Holden. He's a regular guy from Earth. Good childhood, nice parents, and that makes him an idealist. He feels naive sometimes, but he tries his best all the time. The conflict inside is that he expects better from people than they are, and then constantly gets disappointed. There is one point where he doesn't realise that words can be bigger weapons than guns. I'm not sure if he'll ever change. Maybe I don't want him to.

The other point of view is Miller. He's a belter. Grew up on a station built in a rock. He's also a cop. Kind of a sci-fi Dick Tracy. Even has the hat. He's much more a realist, and I found that I liked him more. He is jaded, and gritty, but he does what must be done. He also has a keen insight to things. They do clash with Holden. The funny thing is, I think Miller sometimes wishes he could see the world the way Holden does, but he's seen too much for that to be possible.

Compared to the TV show, this encompasses the first season and some of the second. The story is pretty much the same, with some minor changes here and there.

Overall, I enjoyed the story very much. It has personal stories as well as a grand scale of system wide events and politics. Now, let me finish this review, I have the next book to read.
Posted by Isabelle at 3:56 PM No comments: