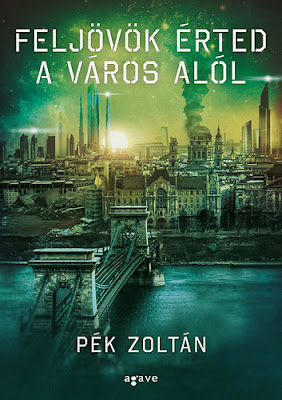 I’d translate the title of the novel to: I will come for you from below the city.

My first thought upon finishing this book was "that was weird". I don't read weird books. I like stories that follow the usual rules. You start at the beginning, follow the story all the way to the end, and then stop. You don’t really get the sense of stopping, even though it is a definite stop, but it leaves so many questions unanswered, you want an epilogue of something.
This story did start at a kind of a beginning. The kind where the person's life starts to change, take on a new shape. The actual story was slow. There was a lot of talk of dreams, the past, the present. What it was actually going to be about was very vague. When it culminated in the actual dystopic ending, it snuck up on me, in a kind of futility. I’m a story person, I read books for stories, but this book wasn’t really about the story. It was rather about the author communicating his view of the world.

This is a Hungarian dystopia. I have read some old, classic dystopias, like the oldest one of all, Zamyatin's We. Also modern ones, like The Hunger Games. Zamyatin was Russian, but even his world was a happy place compared to this world. In the classic dystopias the characters often think they are in a utopia, and only slowly realise the truth. The lead character in this novel, Corvinus, knows he lives in a terrible world. The reason why he is unlike all the previous leads is that he doesn't want to do anything about it. He accepts it as it is, and tries to carve out a life for himself among the debris and the filth. He has no future, no hope, no goals. All he does is exist.
Dystopias are supposed to depict a future terrible world, but this is not the future. Not really. The crumbling buildings, the few new ones among the old, the talks of politics, the endless number of beggars, the fear of being robbed on the public transport, that is reality. The feeling of no hope, no future is what permeates the minds of many Hungarians today. Some try to make a better world for themselves, but like most of the characters in the book, the truly successful ones are criminals. Others exist like Corvinus, like the line he mentions from the national anthem that means something like: no matter what, you have to exist here. Among the ruins of past greatness, with the feeling of paranoia and fear of annihilation. Then there are those, who can't take it anymore, and try to escape to a place where there is hope, even when they know it will probably not be better, but just the existence of a belief in a hope of a better future is enough.

This book is modern in many ways, but if you are looking for the next Hunger Games, this is not it. There is no grand fight against evil. There is actually no great evil at all. No big leader that you need to end, then all will change. In modern dystopias the theme is often that if you win against something marked as evil, the world will be better. There is no villain here. No fight for the greater good, like what seems to come from the Western World. Just survival, existence of the ordinary, the little person. The main character is no real hero. In this it reminds me of the old dystopias, where the main character faded into the world without ever making an impact in it.
The language of the book is modern, but also clever. Hard to describe, but even the abundance of curse words gives it a certain type of feel. The actual character of Corvinus comes through more in his use of language than anything. The descriptions are of the sort that make you feel. Not anything good, but that is the goal.

Overall, an interesting, though disturbing book. It leaves you with a feeling of such hopelessness, you want to read something which happens in a pretty place, where people actually care about each other. Where the future exists, and you can trust that you won't just melt into the trash around you. Do not read it if you have a tendency for pessimism, or depression.

Posted by Isabelle at 4:12 PM No comments:

Email ThisBlogThis!Share to TwitterShare to FacebookShare to Pinterest
Labels: 2015, 3 stars, book, Corvinus, dystopia, Feljövök érted a város alól, I will come for you from below the city, review, Zoltán Pék
Newer Posts Older Posts Home
Subscribe to: Posts (Atom)