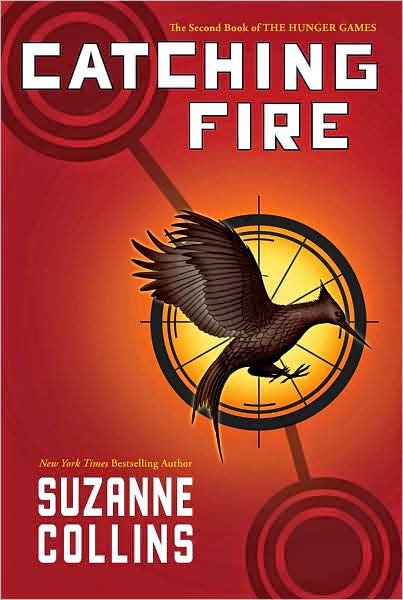 The second installation of The Hunger Games trilogy is just as fast paced as the first one. It's the right speed for the young reader of today.

The story picks up a little after the end of the previous book. Some flashback is unavoidable. We learn how Katniss' life changed after becoming a victor, and how she has to face that nothing will ever be the same again. She goes on the tour that was mentioned in the first book, but we don't see a lot of it. I did wish that part wasn't so glossed over. Of course, the threat of President Snow hangs over everything. Without revealing too much, life only gets harder for everyone. I did have a feeling about District 13, and I'm just going to say that it was justified.

Katniss is 17. I have forgotten that, until Collins reminds me. She does develop more as the story progresses, but she is still not an adult at the end. Children that grow up too fast sometimes find it hard to grow up all the way, and she's no different. Though I have to admit, she'll probably never be a calculating and shrewd person that would enhance her chances of survival under the conditions.

Peeta is still a prominent person in the story. I'm sure many people wish that he moved on from Katniss, or Katniss fell for him, but neither seems likely. He remains a very likeable character that you find yourself rooting for. He develops a little as he sees more of reality. In a way, being a baker's son and an artistic person had hid some of the cruelties of life in Panem from his eyes. This growth allows him to use his natural gifts better, as he becomes more aware of them.

I've written in my previous review that the style bothered me. I did overcome it, but that was because I listened to a part of the book as an audiobook. I do get the audiobook as well as the paperback sometimes, as when I'm engrossed in a story, I enjoy listening to it while I do housework. Hearing the story like that changed my perception of the first person present tense. It felt like I was listening to the inner voice of a person. When I went back to the book, the sensation remained.

Overall, the second book didn't disappoint. They say the sequel is not as good as the original, well, this felt just as good. It really wasn't like a sequel, just a continuation of the first, as if they could have been one book. Maybe in the future they'll print all three in one, like Lord of the Rings. Now I'm off to read the final part, that will surely make me cry in the end. This is a dystopia, after all.
Posted by Isabelle at 10:45 AM No comments: