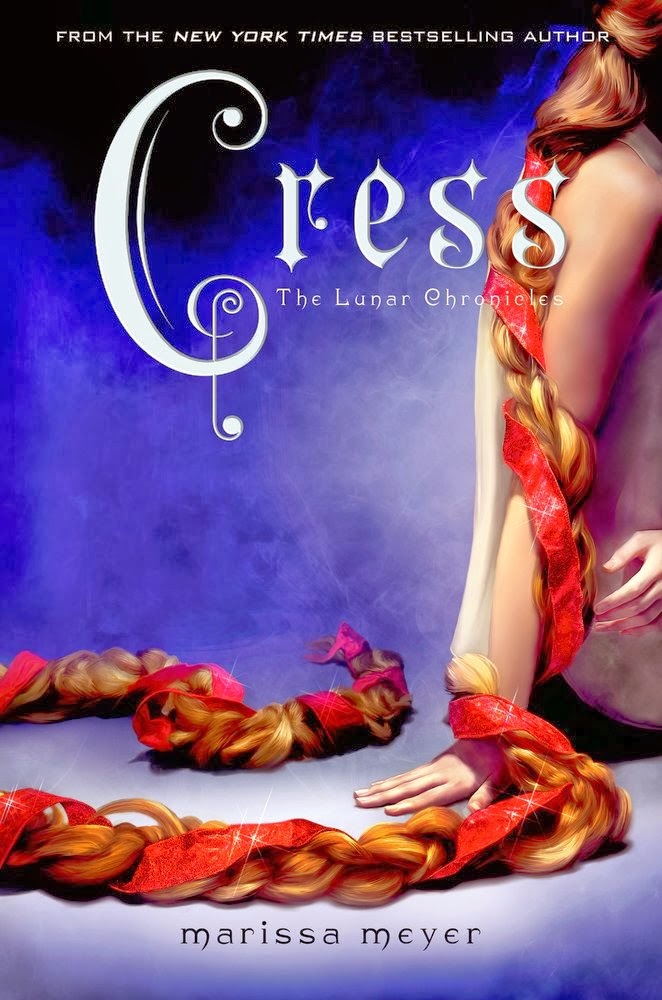 Cress is the third instalment in the Lunar Chronicles. The first two I read in a few days, and I was thankful that they were both out. I had been waiting for the next book for several months. Was it worth it? Oh yes. It's not as fast paced as the first two. Those also felt more together. Perhaps because there were fewer characters. What it doesn't lack is events. There was a lot going on.

The main focus of the story, if it can be called that, since it wasn't that pronounced, was Cress. I kind of loved her. She is fragile and strong at the same time. Capable and lost. I love her dreamworld. In a way I could identify with that, because I do make up stories in my head with me as the central character as well. I was alone a lot too, though not as much as her.
The other characters developed through the story. Mostly Cinder, of course, since she has the most on her shoulders. Thorne has also grown, and I was happy to see more of him in this story.

It is hard to write about the book without spoilers. The middle was a bit slow, but it quickly picked up. Things that I loved about the book:

Overall, great instalment. The ending was kind of surprising, and it also built up to the next book well. It gave me a sense of closure, but anticipation. I didn't feel that the characters were broken off mid-sentence, while it was kind of a cliffhanger. Can’t wait for Winter. Can’t give less than 5 stars.
Posted by Isabelle at 4:41 PM No comments: 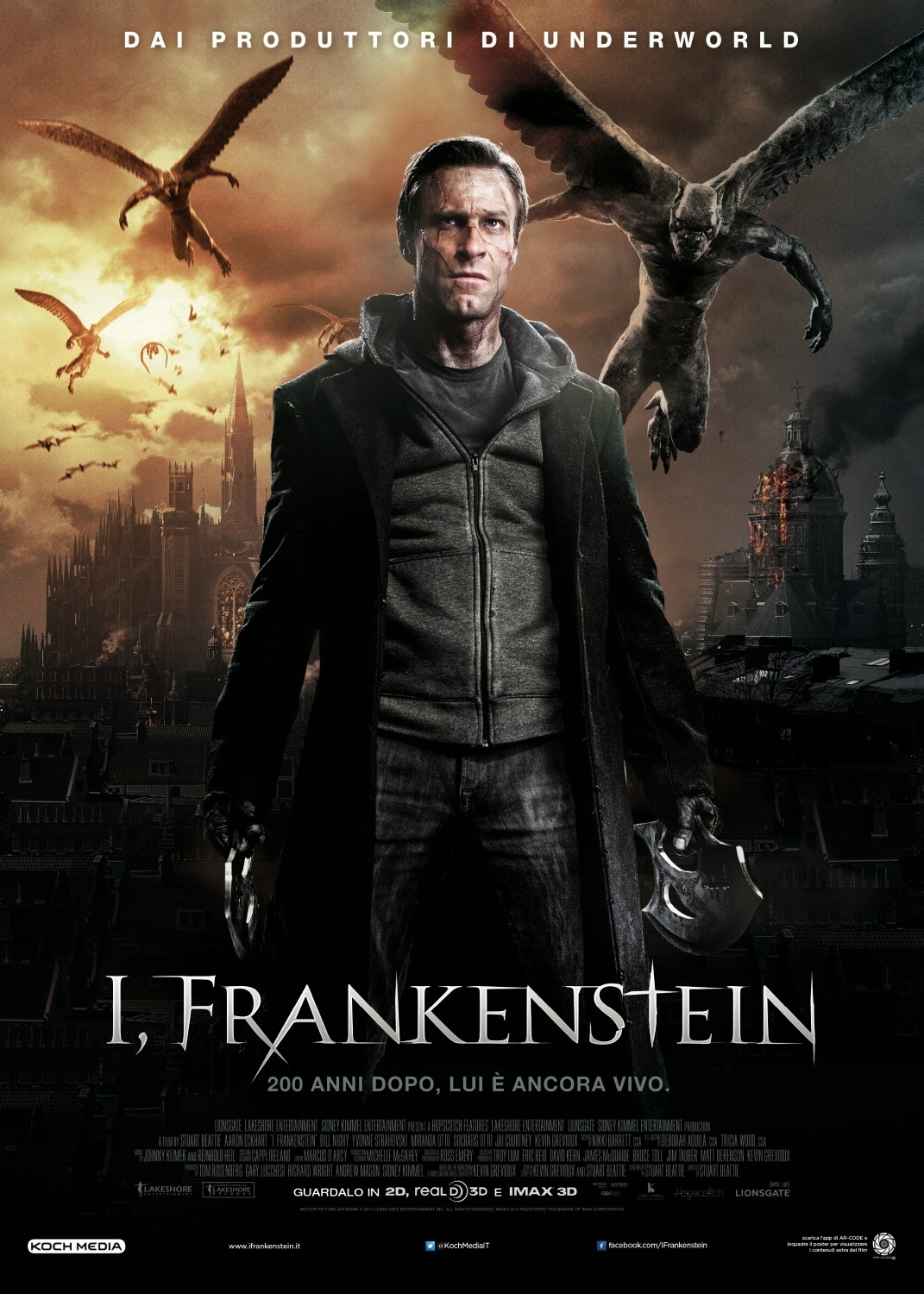 I really can't remember what I expected from this movie. I'm pretty sure it wasn't what I got though. I checked the trailer again, and I think I wanted a movie that had good visuals, solid action, and some sort of a fantasy-based story line. I sort of got it, but it all fell flat.
The background is basically a snippet of Christian mythology. It reminded me how much people forgot about the rich mythical background that Christianity had in the Middle Ages. Back then it had a rich story background, with angels, demons, spirits and the like. I'm not a Christian, but I love good fantasy stories, and myths to me are that. However, the talk about god and things just felt awkward. I live in a country where there are a lot of atheists, and all the god talk made a lot of people snicker in the theatre. The gods in Percy Jackson felt more rational.
The visuals were well done. Seriously, people turning into gargoyles looked cool. The way demons and gargoyles died was spectacular.
The real problem was the story. It would look good on paper, but the execution was just lame. There didn't seem to be an emotional background. I couldn't connect with the characters at a deeper level. The whole story was rushed to make space for the action scenes. I wouldn't mind some mindless action, but I would like to at least care for the main character a bit. Maybe if he died at the end it would have been more interesting.

The actors are okay. Aaron Eckhart was a good, stoic Frankenstein's monster, who was named Adam. Couldn't care much for his plight, though. I did understand that in a way it's about what it means to be human, and that in spite of being so different, he still has good in him, but that was about it.
Yvonne Strahovski was playing the romantic interest, but there was 0 chemistry, or any feeling of love between them.
Miranda Otto's character, Lenore was an interesting character, but a bit inconsistent. I didn't get the conflict between her and Adam. I mean, they didn't have one, then suddenly they did, and again suddenly, it was all forgiven. It just felt like a really silly plot twist. Maybe it would have made sense if it had more of a build-up, or background, or something, but it didn't make sense the way it was done.
A silly little thing that bothered me was that I couldn't remember where I had seen the actress playing Keziah (Caitlin Stacey - looked it up). She played Kenna in Reign, if anyone was also having this problem.

Overall, the movie wasn't really enjoyable. What failed it was the story. While it had all the elements that could be good, it was a let-down. I'm only giving it two stars, because the visuals were good. What I would like to see is to leave Adam out, and just make a movie about the gargoyles.
Posted by Isabelle at 3:27 AM No comments: 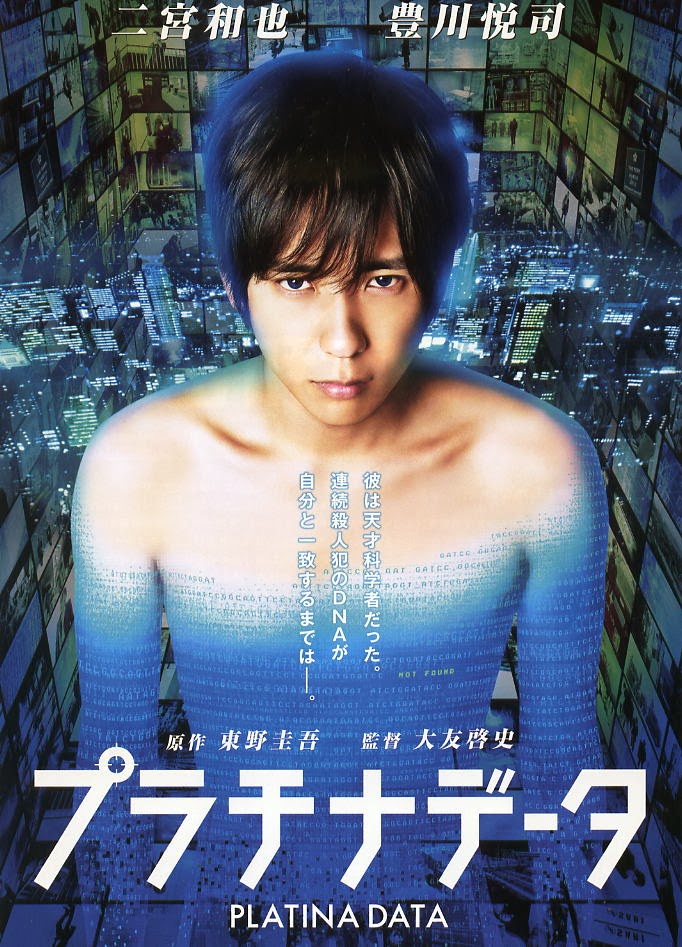 Platina Data is a Japanese thriller / sci-fi / mystery. I mainly watched it because Kazunari Ninomiya was in it, but I also found the premise of the movie interesting. In the movie, Japan is developing a DNA database that has everyone in it. The main goal is to be able to solve crimes more easily. However, already at the beginning we can see that they have taken DNA profiling to the next level. When people closely related to the program die, a surprising series of events start. More would be spoilers.

I found the movie interesting. The story had me glued to the screen. Though frankly, I knew who the killer was halfway through. It's usually the case with me. I probably watch too many crime shows. What did keep me watching was Nino's character, whose story was an integral part of the movie.
The cinematography was excellent. Some pictures I was tempted to pause, because it spoke of so much. Silence is always more difficult than dialogue.

The main character is played by Nino. He's a scientist working on the DNA system. I have watched him in other movies, and I always find him very good. He made me forget that it was Nino that I was watching.
The other main character is Detective Reiji Asama (Etsushi Toyokawa), who is tasked with figuring out who committed the murder. While being a prolific actor, I actually haven't seen him in anything, but I'm definitely going to hunt some of his work down now.

Overall, this is an exciting movie. It has many twists and turns, and I didn't even see them all coming! Worth checking out, even if you have to read the subtitles.
Posted by Isabelle at 2:29 PM No comments: