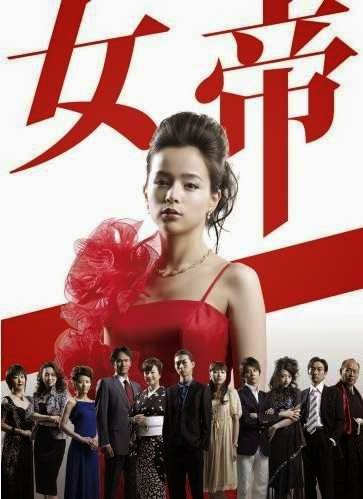 Jotei is an adult drama. It has themes of sex, prostitution, yakuza and political corruption. For the non-Japanese viewer it's especially interesting as it gives us a glimpse of the Japanese way of thinking about sex and virginity. In a way it's a modern geisha story and sometimes made me think of the geisha books I've read. It's a story that can be most understood and appreciated by women.
The main reason why I recommend it most for women is because the story is told as narrated by the main protagonist, a woman named Tachibana Ayaka. It is through her eyes that we see the problems she faces on her road to becoming a "Jotei"; an empress. A Jotei is a woman who is very important in the nightlife of Ginza, the main entertainment district of Tokyo.
She starts out as a regular girl who looses her mother at 18 and is left alone. She then learns that her father is still alive and left them to become a powerful person. She decides to become powerful herself and have the men who had stood above her bow down to her. She is willing to do anything in order to reach her goal. Upon reading this we might think that she is not a likeable person, but still, her heart is good and we find ourselves cheering her on towards her goal.

Kato Rosa plays Ayaka and she is a very good choice for the role. She is a pretty woman, but not too beautiful. This makes her more real and likeable for women as regular women can also identify with her. Through her we can also see that inner beauty can enhance your outer beauty.
There are many other characters beside hers that are important, mainly because the story encompasses many years. However, I must make a note of Date Naoto. He is the first man who helps Ayaka on her journey and becomes a very important person in her life. He is the kind of a man who makes us and Ayaka consider just giving up on her goal and settling down in a house to have 2.3 kids with. This ambivalent feeling gives and extra tension to the story. Even more so as he's played brilliantly by Matsuda Shota. He is the kind of actor you just want to see in more dramas as his performances always have a sort of unique elegance. Just what we can expect from someone whose whole family is made up by actors and actresses.

This drama is truly wonderful. The story is very complex and like a book it makes you want to just go to the next chapter. Therefore, I recommend watching it over the weekend as once you start, Ayaka's story just sweeps you up and doesn't let you go until the end.
Posted by Isabelle at 5:00 PM No comments: