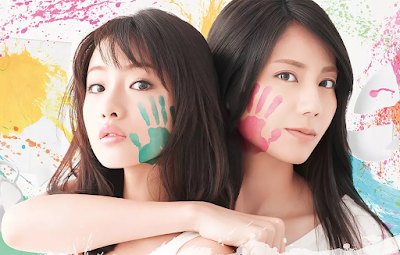 Dear Sister is an interesting drama. It’s mainly about the importance of family, especially siblings. Being an only child myself, I could just look on, and remember when as a little girl I so wanted a sibling.

As the title suggests, the two main characters are sisters. Though I do have to note here that they are not the only siblings in the story. There are also two brothers and a brother with a sister, so you get all combinations. Let’s focus on the main storyline. The two sisters seem very different.
Hazuki (Matsushita Nao) is the responsible one. Seemingly. She has a government job, a boyfriend, lives alone, looks after her mother. She wears shirts and pencil skirts.
Misaki (Ishihara Satomi) is the younger, irresponsible sister. She left home at an early age, never got an education, works in shady places, has men issues. Because of these Hazuki sees her as the lucky child, the one who could always do what she wanted. However, she could be wrong. Assuming that Misaki is selfish, Hazuki always sees everything through those glasses.
However, all may not be as it seems. Misaki returns home to turn everything upside down. Or is it the right side up?

This drama encourages people to be brave. Not settle being content, but to actively seek out our happiness. There could be pitfalls, but with the help of friends and family, you can get there. It also wants you to be brave through life’s hardships. At last, it wants you to not make assumptions about people. Talk to them instead. They may surprise you, and what you thought as evil, may turn out to be good, and good things evil.

I highly recommend this drama. It not only has a charming family story, but also has a mystery element that will keep you wondering.
Posted by Isabelle at 8:05 PM